I’m sure you’ve read it over and over again. You’ve seen the before/after pictures of people who’ve lost 20 pounds in 8 weeks.

And right above those photos, you’ll see a nice caption of ’So What’s Your Excuse?’ — which is meant to inspire and urge you to action, but it doesn’t typically do this for most people (that I’ve interacted with at least).

Instead of spurring you into action, it just makes you feel bad. Like all of the effort you’ve put in isn’t good enough.

Or you’re just not cut out for improving your body and getting into better shape.

When someone shoves before/after photos in your face and asks you what your excuse is, it’s not really helping you uncover the root of your inaction.

This is what I think of every time I see these so-called Motivational Images: 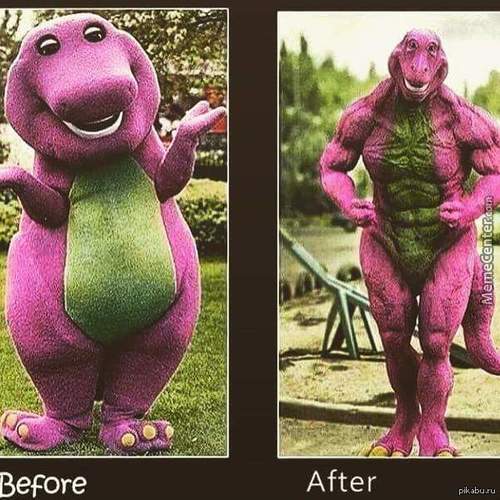 I mean, let’s face it. If you’re not getting the results you want with your training and diet, there are a handful of things that could be going wrong.

Something is wrong, but what do you fix?

It could be a problem with inaccurately tracking your intake.

It could be that you miss your training sessions consistently.

It could be that you make all these plans to get it done, but by the end of the day, you’re just spent from all the other obligations in life.

There are a bunch of reasons to blame for why you may not be getting the results you want.

You can even call these ‘excuses’ if you want to, but that’s not entirely helpful.

Not at least until you understand the reasons why you have these so-called excuses.

For instance… if you ran me through all the reasons why you couldn’t do something, and I told you to “just do the damn work,” would you be able to do it?

Telling you to just ‘do the work’ or asking what your excuses are (in a condescending manner) does NOTHING for getting you to actually make the changes you want.

It’s lazy (but easy) for someone to simply say “do the work” and nothing else.

But that happens every single day.

Not losing fat? Just eat less than you burn.

You probably get the point.

Most of these mantras like ‘just do it’ (sorry Nike), and ‘what’s your excuse?’ are shallow ideas that don’t ask you to dig deeper and make some sense of why things are not happening the way you want them to.

They fail to help you understand yourself on a level that allows you to make the changes necessary to be where you want to be.

The Voices In Your Head Can Be Harsh

The amount of visual and auditory stimuli we receive every single day is staggering. Ideas are given to us through our conversations with others, what we read, what we listen to, be it the news or podcasts.

We see ads on the street, in the subway, on TV, on this here internet, on our phones, in the games we play — it’s everywhere.

Not only do we get all of this influence from the outside world, we also talk to ourselves.

Those messages affect the things we say to ourselves.

And many times, that voice (also known as self-talk) is not so kind.

For whatever reason, that tiny voice will often tell us we need to be more muscular, less fat, taller, prettier/more handsome, skinnier, stronger in the gym, blah blah blah.

Many of those messages are negative by default because they focus on all the supposed flaws, and they tend to remind us over and over about what we don’t have or wish we had.

Quick Question: Would you dare say the things you say to yourself to a close friend? A stranger? If not, this should be a sign that it might not be the best of ideas to say them to yourself.

I’m not so sure why, but humans have this odd trait of focusing on the negative and forgetting all the positive stuff.

So when we feel like we need more muscle, the thought process tends to be in a negative frame.

“Ugh, I’m so small and weak. I wish I had more muscle, but it’s just so hard. I just don’t have what it takes.”

It would be much more useful if the narration in our heads went something like this:

“I might be small and weak now, but it won’t be for long. I’m training hard. I’m eating right, and I will stick to that process until I’m bigger and stronger than ever.”

As you see, there’s a STARK contrast in the things you have the possibility of telling yourself but we tend to default to the negative mode.

A trick you can perform on yourself every time you have a negative thought (any thought really) is to play Devil’s advocate and say the exact opposite to yourself.

This is especially useful if you’re used to saying negative things to yourself.

“Exercise is too hard. I hate going to the gym because I’m never going to be the size I want to be.

Flip it to the following positive thought:

“Exercise is challenging, but I’m getting better. I like going to the gym once I’m started with the training and I feel great afterward. I know I’ll reach my goal weight soon.”

I know this is simplistic and if it feels odd the first time, that’s normal.

I’m using this as an example to show you that you’re capable of thinking something completely different than your default… and with practice, you can begin telling yourself things that are much more pleasant and gratifying.

And when you learn to observe the negative self-talk and change it on the spot, you’ll begin to see that your actions will probably change as a result.

I will be writing about this more in a few days (new article) and I’ll cover the power of a Growth Mindset versus a Fixed Mindset with research to back it up (for those of you who love science).

You Don’t Need More Motivation (You Need Momentum, Instead)

Ahh, the M-word. Motivation this, motivation, that.

If I just had more motivation, I could… [fill in the blank].

How many times have you uttered that to yourself?

If I had a penny for every time I did, I’d be writing to you from the deck of my Maui mansion sipping a cold drink.

I used to wait on motivation to strike when I wanted to get things done, but I realized over time that things just weren’t getting done!

Eventually, I realized that motivation (the intense urge to change) is much like a feeling (of any kind). It can come and go in a matter of minutes.

One second you feel like doing the work to lose that 20 pounds by the beginning of January, and the next minute you can’t be bothered to so much as get up off the couch.

Motivation is a fleeting emotion and it rarely lasts.

If you ever ask someone who’s in great shape how they stay so motivated, they’ll often tell you they’re not always excited to go to the gym or eat right. In fact, they know some of this stuff just isn’t that much fun.

But that doesn’t keep them from doing it. In fact, they know that the more they work toward their end goal (be it a leaner body, or more muscle, more strength, fitting into those old pants, etc), the more motivated they become.

So any one day is irrelevant to whether or not they *feel* motivated to keep going because it’s not about being motivated every second.

It’s about being consistent, taking action daily, and acting despite whether or not you feel motivated.

And when you build up consistency over time, you’re building something much more powerful than motivation. You’re creating momentum.

And when you have momentum, you don’t need to succumb to the feeling of needing any motivation to get your training and diet in order.

It becomes a part of your being, instead of trying to make it work all the time.

Dissect Your Obstacles And Get Started

If you have a history of inconsistency with anything diet or training-related, there are some clues as to why.

I can’t do the work for you, but here’s a checklist of things to ask yourself to see what the issue could be.

Those are a lot of questions, but you can’t know what to change until you figure out where you might be going awry with your efforts.

Being consistent is easy in the short-term. This why so many people do well in the first few weeks or their New Year’s Resolutions but fall off the wagon by February 1st. And before you know it… a year’s gone by and it’s time to figure out your health and fitness plan again.

I made a video about taking action, and why sometimes taking imperfect action is more important than doing everything perfectly.

Sometimes I find myself in places where I can’t access a gym, or track my meals.

But I make due anyway by finding a park to train in, even if I’m just doing push-ups, pull-ups, and jump squats.

If I can’t track my intake, I do my best to eat foods I’d normally eat and make healthier choices when eating out.

It ain’t perfect, but it doesn’t have to be. It just has to be consistent over time.

Here’s how to take imperfect action:

There’s a better way to get focused and on a direct path to reaching your fat loss goals. Instead of giving into negative self-talk and talking yourself out of training and eating right consistently, you can learn strategies that work for you, not against you.

Instead of waiting for motivation, you can work on building up momentum, even if it’s slowly, over time and creating lasting change by taking calculated action, instead of just trying to figure it out all the time.

2 thoughts on “Why ‘What’s Your Excuse?’ Isn’t That Helpful”