Today, I want to briefly touch upon a few points and highlight a client of mine who has done very well with his performance, athletic and aesthetic goals, all in a span of just over 3 months.

I can’t give his full name because he’s currently being scouted to play professional basketball overseas, but for this article, we’ll refer to him as CT.

CT came to me early in 2012 with the goals of dropping some body fat after his basketball season was over for the year. Since he wouldn’t be actively participating in practice and lots of sport-specific activity, it was a good time to drop the calories and focus on fat loss for a period.

I just got an email from him last week for an update on his progress and I wanted to take a second and share it with you for two reasons:

Now let’s get to the good stuff.

In just 13 weeks, CT has improved majorly on all the big lifts. The following list will display the movement along with his starting weight and current weight.

The glute bridge is NOT typical. This was a new movement for him, so it took him a little while to find a good starting weight. As you can imagine by now, his posterior chain is pretty solid.

Thick. Tight. Solid. (internet joke – holla at me if you get it)

And here’s an image from where CT started and where he is currently – much leaner and athletic-looking. The first image is 253lbs and the second image is 238lbs – a 15lb loss. 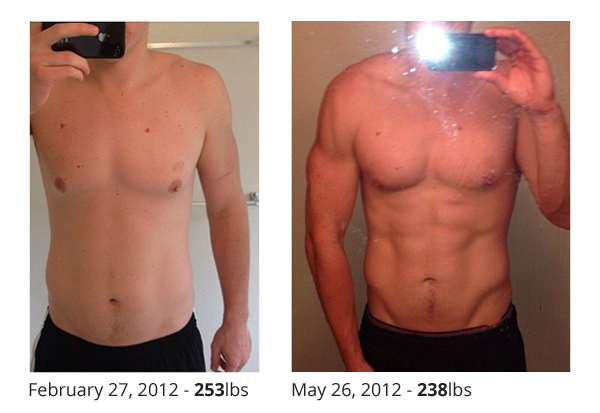 Alright, so what I’m most impressed with is his Hang Clean and Bench Press numbers. Everything else is good too, but I’m pretty familiar with improving people’s squats and deads during a diet. I’ve been asking him what special elixir he was taking, but he won’t share the secrets.

Okay, I’m kidding of course. I looked at his training progress on a weekly basis and we chatted about his nutrition – making sure he was hitting his macros and getting the recommended amount of protein by the end of the day.

He even had long weekend in Vegas with his friends, taking advantage of the good food and drink that abounds, yet still managed to lose 15lbs in 13 weeks.

So What’s The Big Deal?

CT was motivated and determined to reach his goals. Of course, he’s eternally motivated because he wants to continue his basketball career post collegiate level.

His reason for persevering is reinforced due to his focus on an athletic accomplishment (improved performance, getting to the next level) as opposed to a sole focus on getting six pack abs.

While there’s nothing wrong at all training for aesthetics, I find it can become cumbersome and dare I say it, a little boring if we’re not constantly chasing strength or performance goals.

In saying that – it’s worth analyzing your current situation. Why are you training? Is the end goal worth enough to do what it takes to reach that goal? Is it enough to endure the fat loss plateaus and other diet-related problems?  If not, then you better figure something out.

CT’s training program was mostly built around the movements he was already doing (squats, bench, hang cleans) and where I saw he could improve (hip thrusts, hyperextensions, extra pulling, rack deadlifts).

I had him training only 3x per week, using a full-body routine. Each day was varied in intensity and built around a particular movement for the day. So while he wasn’t training the deadlift every session, he was still working the same muscles on days he wasn’t deadlfting. The same applies to bench press, squat, etc.

Congrats to CT – I hope your dream of playing abroad is fulfilled and it’s been an absolute joy helping you get strong and lean.

28 thoughts on “Train For Performance, Not For Aesthetics: How CT Lost 15lbs in 13 weeks While Adding 70 Pounds To His Squat and Deadlift”