Today’s article is written by a friend and current client of mine, Bryan Barletta.  I’ll also be publishing another article he wrote this month as well.

You want me to eat how much? I had just read JC’s latest email response. It said that I need to eat more, across the board. At 5’8, 165lbs I was having trouble gaining weight for three weeks at a 3200 kcals/training days and 2400 kcals/rest days allotment while working out four days a week.

Now, JC wanted me to drop my training to three days and increase to 3400/2600. I poured myself another bowl of cereal and my wife asked if he was going to start paying for some of our groceries.

Skip back to October, our first month working together. My calories were 2700 kcals/training days and 1800 kcals/rest days and I was working out three days a week. Pre-JC I did Crossfit for three months. Before that I did every stupid diet out there, starting with 4 Hour Body, then Atkins, then Paleo.

But it got me from 190-195 pounds down to 155. The lower end of that happened through what I’ll blatantly admit was starving myself, but I had convinced myself that I was “fasting.”  Sadly that experience cost me just as much muscle as fat. Up until this point, I had never really worked out before.

While the scale did say 155, I couldn’t have looked worse. This was my first experience with “skinny-fat.” The scale couldn’t lie, right? 155 meant I was skinny, but the effect of all my poor choices had resulted in what looked like a skinny kid wearing a trash bag with a few gallons of water in it. It was gross and it left me in a worse mental place than before. Here I was, at a lower weight than I had been since Middle School, but nowhere near looking how I wanted.

Following JC’s instructions wasn’t easy at first. Food makes you fat, right? So I didn’t want to eat that much and tried to always eat less on rest days. I didn’t get it. I realized eventually that regardless of what you’re doing, your body needs a certain amount of fuel or you’re doing more harm than good.

But logic be damned, I wanted to lose weight. So I continued to squeeze myself into my tight clothing just to feel “skinny” while I told myself “you wouldn’t look good all muscly” and followed JC’s advice, well mostly.

Fast forward to the 75-day mark. For some reason I can’t see the results. Everyone else can but when I get out of the shower all I see is the fat around my belly button. Everyone has a sticking point, and this one is mine. The recomp plan I was on did it’s job and leaned me out across the board. Not any great muscle growth, but I looked lean, almost fit, and definitely healthy.

However all I saw was that stomach. The 315lbx5 deadlift set I completed the day before is pushed out of my mind, regardless of the fact that I could barely do 225×5 on my first week. It wasn’t enough, so I badgered JC until he set me up on a Rapid Fat Loss diet (Protein Sparing Modified Fast) for 12 days so I could look “better” for my cruise. 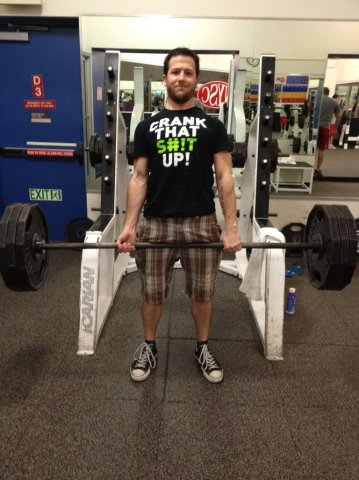 The result was me being the scrawniest I’ve ever been. And JC warned me of that, multiple times. But as someone who was fat before, why would scrawny be a bad thing? He didn’t understand, right? Better to be scrawny than fat.

Wrong. They both suck.

But while I lost more time with my suggestions over listening to what JC laid out for me, it did open my eyes. I had made substantial progress but I would have made even more if I would have eaten what I was told every day and not have done the PSMF diet. I had done exactly what I promised JC I wouldn’t do on my first consultation; I tried to lead his training in a direction I wanted.

Around the same time, I had finished reading the Song of Ice and Fire series (Game of Thrones for you illiterate folk who prefer HBO over a book). One of my favorite lines in the book repeated often, is “you know nothing.”

This became my motto. I knew nothing.

Before this past year, I thought it was smart to just eat 2lbs of fruit for breakfast/lunch and struggle through my hunger. I didn’t understand what diet really meant. I most certainly didn’t get exercise. Yet here I was paying someone to train me and then pushing him to do what I wanted to do.

JC did this fantastically by compromising on his plan just enough to show me how bad my ideas where and help enlighten me.

It just took longer than I had hoped.

People forget that exercise and diet is a science. Most people view it with their own opinions. The parallels between ‘science vs. religion’ and ‘science vs. diet and exercise’ are astounding.

Each day at work I build a massive sandwich. Usually it has 4oz of fresh mozzarella, 4oz of prosciutto, 12oz of fresh roast beef all on 10oz of ciabatta bread. As I build my giant sandwich, which I eat 1/3rd a few hours before the gym and the rest after, everyone in my office has an opinion. I’ve been working here for three months and I still can’t eat my healthy delicious meal in silence.

“That’s too much fat” one states.  I ask if he knows how much fat he’s eaten that day. Based on the two cliff bars near his desk, it’s hard not to laugh that he’s almost halfway to the fat content of this sandwich with 1/8th the protein.

“But carbs after 8pm are bad” I hear. They’re astonished when I tell them I finish the gym by 7:30-8pm and eat this after. They’re confident that this is how one gets fat. I resist taking off my shirt, as this is an office environment and plus, I really don’t want to mess up my hair.

“So you only eat a sandwich, nothing else?” I’m asked. And this is where I laugh. Because on this day I’ve primed an entire box of cinnamon toast crunch and a bottle of double chocolate Nesquik for my second meal after the gym.

That’s when they become flustered and refuse to believe. More cardio. Less Carbs. Clearly their plan and dogma hasn’t worked before so by doing more of it now surely will provide the results they strive for. I smile and devour my sandwich, reminding them I’ve only been working out for 6 months.

It gets even worse when people tell you you’re unhealthy. Unhealthy compared to what? To them? Doubtful. To how I was before? Not a chance. To the ideal human? Yea. I’ll give you that. But his life is boring and the trade offs are minimal.

Even when sharing my blood test scores, the conclusion of those around me who watch what I eat are confident, I will die of some medical malady that has no signs but is definitely caused my all my bad decisions. I laugh when they take a cigarette break.

It gets worse at the gym. When you stop thinking about being fat you stop being fat. You perform better. You feel better. And eventually, you look better. Slowly the trainers and others at my gym went from ignoring me to complimenting me on my gains and lifts and even comparing numbers.

They ask how clean I eat. Then they refuse to believe what I tell them I ate today and will eat tonight. Some times, just to rile them up, I eat Twizzlers during my workout.

The most frustrating part of all of this stems from the awakening. I get it now; this makes sense. It’s so simple and you want to share it with everyone. Nobody wants to listen. Nobody wants to be saved.

If they do, they’ll find you. No matter how many times you explain to people that you do zero cardio and work out for 3 hours a week, they know better.

Don’t get frustrated. At one point you were in the same shoes and unless you’re switching professions, these people are not your problem. These people are JC’s problem, so seriously, stop being such a slacker and teach these people how easy everything is.

When you get better, the hero complex becomes something you have to deal with. Your form improves. Your skill improves. You stop making dumb mistakes. This doesn’t mean everyone else has to. There’s only so many people that you can say “hey, is there a specific reason you don’t go full ROM on those squats?” or “have you tried the barbell instead of the smith machine?” before you realize nobody wants to listen.

It’s even worse when the super shredded guy throws 6 plates on each side of the barbell and does 5 mini squats with everyone watching. Thank you for enforcing poor form, buddy!

So here I am. Shoveling a steak and cheese into my face because JC wants me to eat more. And when I weigh in tomorrow and he tells me I need to eat even more, I will shut up and do it. Because so far, the only bumps in the road while working with JC have been caused by me trying to drive this process.

That’s why I hired him, because I need to learn. And it’s really cool when you look back on the progress you’ve made, the friendship you’ve formed, and all the stuff you’ve learned by just letting someone else show you how it’s done.

🔥   Get The Fat Loss Crash Course