Today we have a guest article from Hampus Hertzberg, cancer survivor, fitness enthusiast, and seriously one of the coolest people I’ve met on the Internet. He was one of the 15 winners who got a free 30-minute Skype consult when I released LGN365. After chatting with him, and seeing his progress, I asked him to tell his story here.

Every great fitness story has a beginning; mine just starts off a bit different than others.

My journey began toward the end of 2009. The following year actually became both the best, and worst year of my life.

I was 23 years old, and for years I’d been working part time jobs to support a lifestyle devoted to drinking and partying. However, all of the hiding from real life and anxiety was beginning to creep up on me.

On the night before Christmas eve in 2009 I drank so much that I spent my Christmas eve alone at a friend’s apartment where I alternated sleeping and vomiting while missing out on a friend’s breakfast invitation.

Simply put, I was the biggest douchebag.

I did eventually pick myself up that evening to act as Santa Claus for my friend’s kids, but I then continued my binge drinking until the day after January 1st, which is where I made myself a promise.

I was at the lowest point in my life and didn’t know what to do. I promised myself I’d turn things around.

Just before Christmas I was given a six-month probationary period at a job I really liked in a group home where I took care of mentally challenged people.

It gave my life a purpose and a steady income.

This is where I met a girl who eventually became my wife and the mother of my child.

Things move fast and at the end of January 2010, Betty and I were officially a couple. Life was smiling, birds were singing, and in five months we had bought a really nice apartment together. We were living the time of our lives.

But it wasn’t until August while on our first vacation that all the fun came to a screeching halt.

For some time Betty was worrying about a lump on my left testicle. I was sure that it had been there forever, but she was persistent and urged me to see a doctor. I put it off like it was nothing until one evening she began to cry out of worry and fear of what might happen.

The next morning we went to a health center for an examination. After the first examination, we were sent to a bigger hospital without any information. By now I was really worried.

An ultrasound and many hours of waiting later, we got the results.

The eight months prior to that moment had taken me from being a drunken loser to being the happiest, most lucky guy alive.

Betty burst into tears while I sat there in silence, immediately knowing that I was going to be fine.

I was scheduled for surgery only 4 days after the diagnosis and even though this experience was quite a shocker, I was feeling strong and happy for being alive.

And this is a feeling that has put me in the place I am today.

Something that started to bother me while being home for six weeks post-op, mostly lying down due to the pain I experienced, was that I’d become really overweight during the previous 8 months.

Before meeting my wife, I had starved myself down to 180lbs from 215lbs, just as I had done a couple of times before. Typical yoyo dieting.

So I made up my mind. I wasn’t going back to mindless eating when I had just survived cancer.

I had been going to a gym, not to lift weights, but to walk like a hamster in a wheel either on the treadmill or the elliptical trainer.

I wish I could go back in time to slap myself in the face.

I read a ton of books during my time off. I had my first taste of strength training from the ages of 15-17, but injured my shoulder and had put it off for a while so I knew what must be done for the body I wanted. I wasn’t going to settle for anything less than a ripped body with tight abs, veins and broad shoulders.

I came across Swedish bloggers named Mikael Hollsten, Ako Rahim and Gustaf Ollas. They really inspired me to start lifting weights and then I realized there were many other blogs about fitness.

I started searching and found the website that has changed my life tremendously.

JC comes from a background of being overweight (read the Former Fat Boy Syndrome and listen to the podcast), just like me. Even though he’s in great shape now, the fat boy inside of him is pouring out great information to other former or current fat boys through his writing.

I have read every single article he’s written and the down to earth style he uses to convey his information makes you feel like you’ve know him forever.

That is the reason I think I was so prepared for what to do when he put out his fitness course LGN365.

I suffered from a curse JC calls The Former Fat Boy Syndrome. It basically means that a FFB is afraid to eat the amount of food needed to gain muscle in fear of getting fat again.

So for a year now, actually up until 7 weeks ago when I started LGN 365, I have been through many cycles of gaining and losing weight. I’ve gained weight when eating too much after a prolonged diet, and then restored it back with a new rapid fat loss diet just to crash and start over again.

Sadly, this is a common strategy for many I believe.

So what did I do wrong?

I had read everything JC put out, I had been taking notes, I had read tons of books, yet I couldn’t use any of it. I was helping others with the advice JC and all the people he recommended had given through books and articles, but I couldn’t practice the knowledge on myself

Then came the release of LGN365.

I bought it, plugged in my numbers in the excel sheets, picked a training program and went to work.

And the results speak for themselves.

The reason it finally worked for me was that I let the guide be in charge instead of me. I handed over the responsibility, knowing and trusting that JC had done it right.

I knew how to do the heavy lifting in the gym, now I just had to follow the nutritional guidelines and training program and things would be fine.

Before, I would sit and use the different formulas to get my BMR, set macros, count percentages, adjust and get the right numbers, but since I didn’t trust them upon myself they were useless.

It all comes down to trust and putting focus on what matters.

I trust JC and the reward is a body I have dreamed of having ever since being a little fat kid eating candy and watching Turtles.

My progress in six weeks and five days of following LGN365: 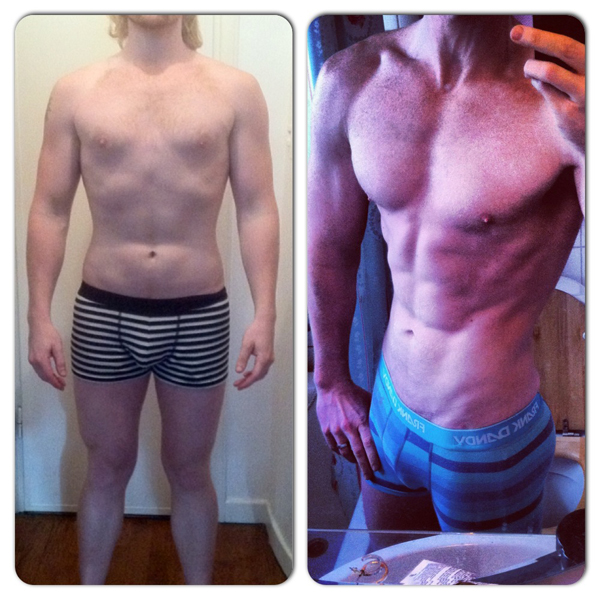 I gained both muscle and strength while losing about 2lbs per week and getting a much more lean and athletic look while eating the typical clean foods, like homemade hamburgers, ice cream, potatoes and sushi to name a few.

It’s been a pleasure hitting my goal of getting lean before I start a hypertrophy program.

Knowledge is nothing without action.

Today I run a fitness website at www.hampushertzberg.com that has an integrated Google translator so everyone can follow along. I hope to inspire and motivate others with my journey, as well as spreading the awareness of testicular cancer. It can strike anyone, so please check yourself each month.

Last week’s post Why Getting Jacked, Strong and Lean is Never Enough: How To Manage Your Fitness Expectations was a major hit, and seemed to have resonated with many, and even pushed a few buttons on Reddit. I have an article coming out that’s all about Growing Pains, and why we need to experience them. That will come out very soon as this piece is a great precursor of what’s to come.

Also, if you’d like to pick up a copy of LGN365, you can get a copy here. Oh yeah, read what Alan Aragon said about the program here: Bullshit Marketing Vs. Honest Marketing: The ZERO Launch.

2 thoughts on “A Reader’s Story: His Battle with Cancer, Former Fat Boy Syndrome, and How He’s Rebuilding His Physique Using LGN365”