I got an email a few weeks back from a reader who wanted some quick advice on what he should do in terms of his training and diet, in particular on how to go from skinny-fat and weak, to lean and jakt.

At one point or another, this is what we all long for, after all.

Now, I say specifically on my contact page that I’m not available to look over programs or design one as a result of talking shop.

However, this reader’s request was pretty simple in that he even said I could respond with a one-word answer, so I was a little more open to see where we could take this for edification of everyone else who may have a similar inquiry.

Here’s his opening email to me, and an image of his current condition.

Question – is recomping an option for me? (simple yes/no would suffice)

Curiosity question (if you have time) – would there be a difference in outcome between route A (surplus on training days, deficit on rest) vs. route B (consistent calories day-to-day regardless of training)? (Assumption: protein intake is adequate)

Thanks JC. If this is considered too much of a consultation and you don’t answer these types of e-mails I understand. 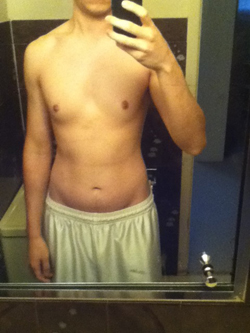 At first, I was just going to tell him to not worry about recomping, with my usual advice that he should simply eat more than 2000 kcals daily, and focus on getting strong.

But after we chatted a bit, he agreed to let me publish the picture, and the email as long as I gave him some personal advice, and shared it on the site, so here we are.

Here’s a bit of his back-story so you can get a glimpse of his life. Pretty typical of someone in his position, and I hope if your physique is similar to his, you can relate and take something from this.

Keep in mind, a lot of what’s going here, I describe in the Former Fat Boy Syndrome (article + podcast).

Paraphrased from our conversation – the quick facts.

So now you know a bit of this guy’s history. He’s intelligent, and has been exposed to good fitness information – the kind that can actually serve and benefit him on the road to building his goal-physique.

But the guy thinks a bit too much. Here’s what I mean… From his email:

Options that I’ve considered from my research to get me there:

All of this stuff is good on paper. It really is, but at the end of the day, no one got big, strong, and lean by closely calculating, and predicting the outcome of their journey.

I’m reading a book right now called The Practicing Mind, and there’s a quote that stuck out to me.

Our boy is pretty wrapped up in a certain look he wants to achieve (the product), but failing all over to make the right moves which will make it happen (the process).

We’re going to stop this today.

I’m about to lay out an entire training plan, along with some nutritional guides, and how to ensure you make progress that will ultimately lead to where he wants to be.

In other words, I’m going to lie out a process he (and many others) can follow in order to achieve the product their going for.

This is going to be a simple routine, and you can mix and match as you like, as long as you

In this program, you’re training 3 days per week or every other day.

You focus on 5 movements with a final 10-minute session to get in as much “pump” work as possible.

Okay, I know what it’s like being a FFB. I’ve been there – super afraid to eat any food in fear that I’d wake up to my former fat self. However, please understand this is not going to happen. I can assure you that.

Also in his case, consuming 2000 kcals a day in hopes of a recomp happening is not the best strategy. Why? Because I know he’ll need more food than that if he wants to grow.

I know this firsthand because I currently have a group of guys whose main goal is to get strong and put on mass, and the main complaint of theirs is not being able to eat enough to gain weight.

Let’s put the numbers in perspective.

If he consistently eats 2000-2200 kcals daily, that puts him at just under 13kcals per pound of body weight. For most who are even remotely active (training 3-4x per week), that’s not even maintenance for them.

So the first thing we have to do is get rid of the tendency to under eat.

If that means tracking your intake to make sure you get a minimum amount of calories daily, so be it.

The worst thing you can do for yourself is continue to under eat in hopes that it will magically change your body – it’s just not going to happen.

And just to burst your bubble, I have a female right now who weighs 109lbs and eating around 2800-3000 kcals on her training days with around 2000 on her off days. What’s her goal? She wants to get strong and actually look strong.

So stop being a weenie when it comes to your intake and eat up. Do what it takes to get the body you want.

What does that mean, exactly?

For his body type, I’d never advise an all-out bulking diet, but one that supports his goals of getting bigger and stronger.

A good starting point is determining maintenance (which for many who are training 3-4x per week is 15 kcals xbody weight in pounds).

Since we want to keep fat gain to a minimum for all the psychological, dysmorphia bullshit us FFB’s deal with, I say to start with about 16-17xbw on training days, and 14-15xbw on off days.

So this is just an example, if you’re afraid carbs will make you fat, then you’re probably afraid to do what it takes to change your physique.

Train for performance as opposed to aesthetics. Here’s a reminder article: Train Like an Athlete, Not Like a Fitness Model.

Get stronger, and have fun with the training.

Do not get in a rush and expect results yesterday.

Don’t try to do more than what I’ve written above.

Simply stick to the plan, and execute.

15 thoughts on “5 Exercises, Focus, and Follow-Through: Advice for the Lifter Who Hasn’t Made Much Progress”