You know, it’s funny. If you were to ask me two years ago about how to improve my squat, I would’ve replied with something like “cycle your intensities,” or “don’t train the movement more than twice per week,” or “drop the movement altogether and replace it with a variation for a short period,” only to return to the movement in hopes of being stronger.

However my views have changed a great deal over the last few years and I have the likes of John Broz, Nicholas Horton, Matt Perryman and Bret Contreras to thank for this.

When building training programs, especially those geared toward strength and muscle gain, I was always weary of taxing the nervous system.  I never wanted my clients to overdo it.

Now, I’m still a believer in rest and recovery, but the old notions of needing a full 3-4 days (or more) of rest before training a movement again have since faded from my psyche.

It began as I experimented last year with frequent full body training.  I was basically doing heavy pulls, squats and presses every other day, no matter what.

Some days were good, some sucked, but I was consistent. Guess what?  I got stronger.

Nowadays when someone asks, “how do I get a bigger squat, bench or deadlift?” I usually respond with “practice.”

Now, I know this is a very simple answer, and there’s definitely more to it, but not much.

If you want to get better at something, frequent practice is best. How you go about that practice definitely matters, but what counts the most is that you’re consistent, day in and day out, with whatever you set out to do.

Some of the greatest weight lifters train daily, and some even a few times daily.

I recently worked with a weightlifter that consistently PR’d on his lifts while even being in a caloric deficit.  Now the diet wasn’t too harsh, but I believe his strength and mass retention was primarily because of his training groove.

This trainee had spent a good amount of time acclimating his body to the rigors of daily squatting and snatching.  When it came time to tighten up his diet, all he had to do was make sure to consistently hit the gym.

And when he did, he soared.

Lots of folks might claim he was genetically blessed, or that his diet was absolutely perfect.  While I have to admit, he definitely has the strong genes from his mommy and daddy, building up to a 550lb deadlift for reps takes serious work and determination.

Do I have the ability to work up to a 550lb deadlift?  Yeah, I’m pretty positive.  But do I have the desire and determination? I’m not so sure of that.

Oh, and with parties, life and Coachella going on, his diet was far from perfect.  He was consistent, though.  That’s the important part.

Another guy I’m currently coaching goes by the name of Peter.  He came to me at 145lbs, very lean, with the goal of building strength and muscle mass.  He particularly wanted to improve his squat strength.

Luckily, this guy had the opportunity to train fairly frequently.  I recently just changed his programming to a 3 on, 1 off rotation as we’re focusing on some bodybuilding stuff currently.

However, today I want to give you some insight as to how I set up his squat training, the loading scheme and how he continued to progress over time.

This way you’ll be able to take the template and use it for your own training.

First of all, I had him on an upper/lower split over 4 days per week.  Each day had an emphasis of either a push or a pull. Everything was balanced, with most muscle groups being hit twice per week due to the overlap in movements and specificity of the program.

The way this program differed from traditional upper/lower splits was that I made him squat every time he entered the gym.  So on his upper days, he was still squatting.  No matter what, I wanted him under the bar.

In 8 weeks, Peter went from 145lbs to 161lbs in body weight.  Now I want you to realize, not all of the weight he gained is actual muscle and fat.  Some of that is definitely water and glycogen as he practiced some fasting in the past, so he maintained a pretty dry physique.  Adding in the extra food and carbs will always cause a spike in weight gain.

To give you an idea of his training, this is what I had him doing.

This day we focused on bench press as his main pushing movement, and then I had him do some light squatting with 70% of his 1RM for 8-10 reps. My reasoning for this is to keep him in the groove and to keep the movement very familiar for him.

On this day, squats are the primary movement, in which I want him giving it everything he has.  With reverse pyramid training, you work up to a top set within the rep range, and then drop each subsequent set by about 5-10% to make the reps. My training manual that’s coming out soon will make good use of RPT training.

Squats: work up to a 3-rep max

Peter’s main movement on this day was weighted chins.  However, since I wanted his focus to be on improving his squat strength, we moved this to the very first part of his workout.  The guidelines for today’s squat training was simple – work up to a 3-rep max and I don’t care how you get there.  Continue piling on weight incrementally until you hit your max or a miss.  Once the max is made, you’re done. Move onto the rest of your workout.  Nick Horton gave me the idea for this one.  Thanks, brah.

Today’s focus was rack deads for 3 sets of 3-5 reps, reverse pyramid style followed up with hyperextensions.  Immediately after these two movements were completed, I had Peter doing 3 sets of 3 reps at 80% of his 1RM.  This was more for practicing the movement than anything.

So what were the results?

In the same time frame, he also added 20lbs to his weighted chins, and 60lbs to his rack deadlift.

Here’s a before and current picture of Peter. 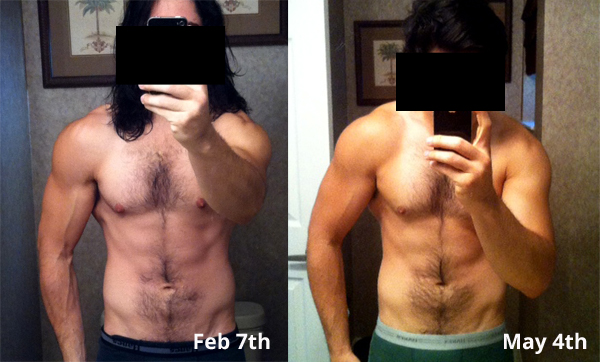 So what can we learn from this?  It’s perfectly okay to squat frequently, and overtraining is likely not to occur as long as you take an approach that is based around your abilities, and work capacity.

As you’ll notice, this program is not in any way volume-heavy.  There are only two days in the program where he’s working near maximal weights (RPT and 3RM days).  Everything else is merely practice – to keep his body primed for the movement.

Peter came to me in pretty good condition, and with decent level of training experience, so I knew he’d be able to handle the frequent squatting.

For those who are not acclimated to training so much, it will take some time to work into frequent squatting.  You’d be a fool to attempt such a routine if you’ve just recently set foot in the weight room.

It’s better to start slow, build your work capacity, and slowly adapt to the stresses of weightlifting, than to jump in with both feet.

Why?  Not because it will over train you, but because your body is not used to the stress.  You’ll likely get very sore, probably to the point having a hard time just walking and sitting on the pot.

This in itself is enough to make a trainee wonder why they started in the first place.

If your goal is squat more frequently, my suggestion is stick with body weight movements on all the days you aren’t squatting with a barbell.

So if you currently squat 2 times per week, work on your body weight squats the other 5 days.  After a few weeks of this, add in another day of barbell training, but make it lighter than what you’re doing on the regular squat days.  I’d start with 2-3 x8-10 of 50-60% of your 1RM.

After another week or two, add a 4th day.  Continue with this pattern until you’re squatting as much as you want (you can even do 7 days if you’d like).

By approaching it this way, you’re slowly increasing the training stress as opposed to dumping it all upon yourself at once.

35 thoughts on “A Case for Frequent Squatting”