In the past, I’ve written about ways to recompose our bodies through alternating high and low calorie days.  For more reading, check out Part 1, Part 2 or a more recent piece titled Body Recomposition without Counting Calories?

However, it’s something I rarely advise for my personal clients as it’s a slow, arduous process and likely better to focus on one goal at a time.  Also, most of us find it troublesome as we deal with analysis paralysis and it’s usually better to limit our choices so as not to screw it all up.

Today is a rather interesting scenario of a client who I initially set up on an intermittent fasting plan to drop some body fat, but ended up recomp-ing in the process, and I’m fairly happy with his results thus far.

When Mike came to me, he was fairly lean already as you can see in his before picture on the left.   Truth be told, he tore his ACL late last year and had surgery to repair it in early January 2011.  Prior to the injury, he’d been training fairly regularly and been as heavy as 190lbs, body fat unknown.

After the surgery, he of course lost a good bit of weight and had emailed me mid February asking about how to go about getting back in shape – his main concern was learning about setting up his diet and practicing Intermittent Fasting on his way to his previous state, but in a leaner, stronger fashion.

After I learned it’d only been about 6 weeks since his surgery, I suggested he skip the sub-maintenance eating for now and allow the extra calories to fuel his recovery.  No sense in inhibiting the healing process eating below maintenance.

Fast forward to June – we begin emailing again.  He’d been cleared to lift again and had been in the gym for a while rebuilding his strength.

His starting weight was about 177-178lbs when he got to me. Pre-injury, his strength levels were pretty impressive for his size and age (he’s 20 now) with a previous bench of 335lbs and squat of 365lbs.

We tracked progress for 11 weeks, July 11th through September 26th and his results were the following for his strength gains (in pounds):

In that time frame he lost 8lbs of total body weight leaving him at 170lbs in the current images below. 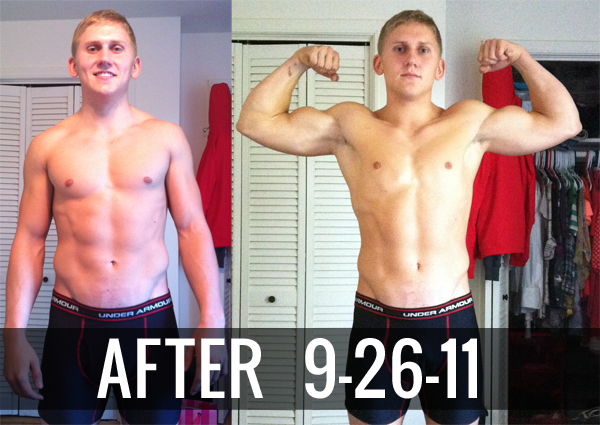 Currently we’re focusing on adding some body weight and getting that bench, squat and deadlift back up to previous levels and beyond.

I set his diet up to take advantage of recovery – much like I do with all clients – putting more food around training and creating the deficit more so on the off days.

Mike’s diet was fairly relaxed, although he did track his calories (it’s an absolute requirement of clients – no exceptions whatsoever).

I made sure he was getting a good amount of protein (at least 1.2grams x bw in pounds), lots of carbs around training and that he covered his bases with fruits and veggies daily.

His training revolved around squats, bench presses, deadlifts, rows and chins.  I had him on a full body routine alternating push/pull emphasis depending on the day.

He had a few questions throughout our time together and figured y’all might be able to benefit from our Q&A that took place.

I had to work late (or something else got in the way of training) so I wasn’t able to make it to the gym on Monday. Should I move my workout from Mon/Wed/Fri this week to Tues/Thur/Sat, or just skip Monday’s workout and continue on my regular workout schedule?

You should move the workouts up a day and train Tues/Thur/Sat.  If you miss 2 days, then just go back to the normal schedule of Mon/Wed/Fri.  Since the workouts rotate in the A/B fashion, always go with what was next in sequence. So if you had B session scheduled on Monday but missed it, and then missed Tuesday, do the B session on Wednesday, instead of A that was scheduled assuming you didn’t miss your training on Monday.

What about social drinking, parties or festivities?

For questions about drinking, refer to the following articles:

Social Drinking on a Fat Loss Diet
While Drinking Beer Give Me A Beer Belly and Ruin My Diet?

As for parties and other events in which you will go off of your diet, this is what I recommend.  Plan ahead.  The best way to do this is accept that you’ll be eating food that’s calorie-dense and atypical as to what you’d have on a regular basis.

The rules are similar regardless of which goal you’re working toward (fat loss or muscle gain).

Rule #1 – Attempt to hit 80-90% of your protein target before the event.  So, if you’re supposed to be consuming 200g protein daily, that will put you at a requirement of 160-180g before you go out.  The goal is to stick with lean sources (protein powder, chicken breast, lean cuts of beef, tuna, etc.) and keep the fat intake minimal (as little as humanly possible).

Rule #2 – Eat plenty of cruciferous veggies (almost anything that is green) to keep you satiated throughout the day.  The main reason is because these are full of fiber and low on calories.  Here’s a nice list for your reference.

The goal with these 2 rules is to create a buffer for the party, or festivities you plan on taking part in.  If you stick with these two rules you’ll likely be fine and won’t obliterate your diet as a result.

My reasoning behind this is two-fold.  The main reason is to make sure you hit your protein requirements and the secondary reason is to keep you full in hopes of making it a bit less tempting to eat everything in sight.

What if I’m at a restaurant or family outing and there’s no way to track my calories accurately?

This is fairly simple – as I stated in the above section, simply try to be moderate with your intake and enjoy the food.  No reason to stuff yourself beyond feeling full.

Also, in many cultures, it’s offensive to refuse food – thus, I never, ever do and I’d never recommend anyone else refuse a meal unless there is a serious reason (allergies, religious beliefs, etc.).

I rewrote these a bit to be more universal and I will be using them later on for future question answering, etc.

There’s a Slow Road Ahead

As you’ll probably figure out, Mike is well out of the beginner stages.  It’s an awesome, yet sad place to be in.  The cool part is he’s made great strides in building an admirable physique.  The downside is his gains in strength are slowing and will continue to slow from here on out.

According to this chart, Mike is well into the advanced territory for bench, squat and the deadlift.

What Made Mike Successful

Mike is a great student, very open to new ideas and ready to learn as he goes.  His focus each week was to become just a bit better than before.  That could mean adding more weight to the bar, squeezing out a few more reps, or nailing his macros on the regular.

He didn’t waste time with an inefficient training routine or an obsessive diet protocol that left him hungry and mentally drained.  He focused on the big rocks and the actions required to get from point A to point B.  No talking, no excuses, just work.

My question to you is what’s holding you back from getting similar results?  Are you doing what it takes? If not, then why?

So I’m here to make your day. If you want to learn how to get into the best shape of your life without all the overpriced supplements, and watered-down exercise advice. Get the crash course. ????